International day of the girl child 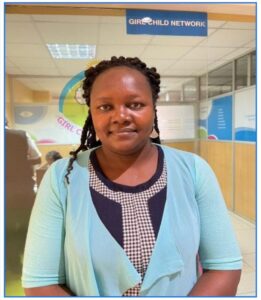 Today being the day that we celebrate International day of the girl child, we are honored to have Peris Mootian who is a Program coordinator with Girl Child Network to help us understand why we celebrate this day and elaborate more on its importance.

The issues of girls started off during World Conference day for women in Beijing in 1995 when the discussions around women which also touched on the rights of girls and the declaration by the women then was to give girls a spotlight especially article 12 which specifically talked about girls and it gave a forum for the world leaders including the grassroots leaders to be able to tackle the issues that were keeping girls from progressing just as the boy child. There were so many barriers that were identified by them that were violating the rights of girls which needed to be addressed for the girls to be empowered and be at par with the boy child.

According to Peris, through research in our own households, We've realized that empowering girls has ripple effect for example if you educate the girl, it means you're breaking the cycle of poverty. You're breaking the barriers that keeps girls out of school, you're breaking the barriers that keep girls from accessing health including their productive health and rights. It also means an educated girl will make sure her children will go to school and have a healthy family. She'll also be able to plan the number of children that she wants and nobody will be able to force her to have like initially women who were having more than 10 children. They will have girls who can decide to have one or two or even decide not to have none especially if they're empowered it gives girls a range of decisions to make it through and a range of opportunities to access and improve their lives. And it is such that they will also contribute to the GDP of the country.

Girls continue to face a lot of challenges, some that have been there for decades. We are still talking of girls getting married at an early age, female genital mutilation, girls getting pregnant at an early age although the government has put in place policies and laws to support the girls like the reentry policy that allows girls to go back to school when they give birth and also the prohibition of the FGM Act that criminalizes FGM but we continue to see these cases and it’s because of strong cultural norms, values and dissemination of information.

If we look at effect of COVID-19, it increased the gender based violence the girls are facing. There were reports that more than 40% of the girls fell pregnant and some of the things that are exposing girls in to teenage pregnancies are when the households are not able to provide basic needs for them like sanitary pads which forces them to access from men. Families are struggling to provide the basic needs for their girls.

Girls are still having challenges accessing education reasons being FGM and early marriage which leads to gender based issues and the circle of poverty will keep on continuing. Poverty also plays a major role in preventing girls to continue with their education putting in mind the cost of living keeps on increasing each day.

Peris noted that some of the statics that has been recorded so far in terms of empowering girls is increased education attainment which accounts for about 50% of the economic growth in the developing countries over the past 50 years. For majority of women, we have seen significant gain in education that has not translated in the better labour market outcome.

In terms of ensuring quality education in girls, this can be ensured by looking at the challenges and barriers that are keeping girls out of school and responding to them. We also need to sensitize the communities to ensure that we don’t continue with FGM because it has its negative effect on the child in terms of health, education and even on her learning outcome.

As we celebrate this day, Peris reiterated that we all know girls too have a voice but we need to see them given that forum to exercise their voice and sit in the table to make decisions especially on matters affecting them will have a positive impact as they grow up.

It will empower them to speak for themselves and also create a safe platform for everyone especially when it comes to politics.

Covid has affected the girl child because it spiked or increased the already existing challenges that they already had. There was a rise on FGM, reemergence of child marriages and increase in teenage pregnancies compared to the pre-COVID years. Drop in the number of the enrollment of the girl child where drought also escalated the challenges girls face in the community.

There are programs both at the government level and at civil society level. At the government level, we have policies in place for example the reentry policy of 1994 which has its own guideline developed in 2018 which mandates parents to make sure girls after giving birth go back to school. We also have the support from the government paying for the capitation where the students get support inform of stationaries. It also ensures all children who finish primary school transit to secondary school but it has been a challenge.

Most of the girls who are funded through scholarships, CDF, or by the county government basically attend only form 1 and it’s because not most of them get continued support so at the end of the day the learning outcome is not completed.

We want every girl child to go to school and attain education that will enable her to be in the labor market. We want girls to learn IT, empowered and sit in the decision making table but how we want to do it differently is the interventions that are undertaken sometimes needs strong follow up and sustainability.

The consistency of the interventions that we do is not being reactive when responding to some of the challenges our communities go through. Interventions that are sustainable and actually will support communities and families to be able to send their children to schools.

Peris noted that we have to support girls especially adolescent girls to ensure that they grow up and be empowered women of tomorrow and the world will be a better place for all humanity.

Head teacher of Kereria Primary school narrates how the school feeding programme has enabled the school going children to stay at school and improve performance.
END_OF_DOCUMENT_TOKEN_TO_BE_REPLACED

This website uses cookies to improve your experience while you navigate through the website. Out of these, the cookies that are categorized as necessary are stored on your browser as they are essential for the working of basic functionalities of the website. We also use third-party cookies that help us analyze and understand how you use this website. These cookies will be stored in your browser only with your consent. You also have the option to opt-out of these cookies. But opting out of some of these cookies may affect your browsing experience.
Necessary Always Enabled

Any cookies that may not be particularly necessary for the website to function and is used specifically to collect user personal data via analytics, ads, other embedded contents are termed as non-necessary cookies. It is mandatory to procure user consent prior to running these cookies on your website.